An opportunity is given to me, to return to Hadspen to see the garden, and discuss opportunities for filming there.

The house has been for sale for two years, and is now being sold, on the cusp of changing ownership, from over two centuries of being in the Hobhouse family.

For information about the history of Hadspen Garden, please go to this page on my own art and horticulture blog, Inquiline.

I return for the first time in 9 years to the garden.

The smell of the former tea room, as I opened the door to the small empty cottage, is time travelling.

Ancient nails on the parabola wall.

I spend a few hours – longer than intended.

A few weeks later, I receive an email that the new owners would rather I didn’t use any footage that I had filmed there, and that it would not be possible for me to return to film again. Understandable perhaps, given the complex recent history of the garden.  But also short-sighted.

In some ways it was a relief.  Even though I never intended to make any kind of ‘peeling paint’ video about Hadspen, now there was no option, although documentation of the garden as it has changed over time, as it is now, is so valuable and powerful.

I went in through a window.

I stayed too long.  I didn’t stay long enough. 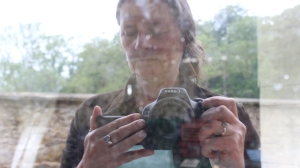 Part of Somerset Art Weeks Festival 2013 (21st September to 6th October), featuring a programme of exhibitions, events and a series of site-specific contemporary arts new commissions, set in wealth of cultivated garden landscape in Somerset. The programme is organised by Somerset Art Works, in partnership with National Garden Scheme (NGS), supported by Friends of SAW and funded by Arts Council England Lottery Funding. It aims to connect the wider public with the creativity between the cultivation of gardens and art making in Somerset.